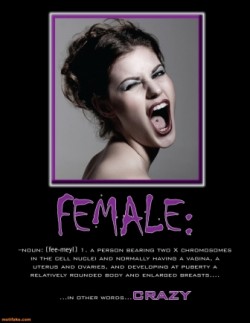 ‘There are certain words that are applied to women specifically in order to manipulate them into compliance: "slut," "bitch," "ugly/fat" and, of course, "crazy." These words encapsulate what society defines as the worst possible things a woman can be. Slut-shaming is used to coerce women into restricting their own sexuality into a pre-approved vision of feminine modesty and restraint. "Bitch" is used against women who might be seen as being too aggressive or assertive... acting, in other words, like a man might. "Ugly" or "fat" are used -- frequently interchangeably -- to remind them that their core worth is based on a specific definition of beauty, and to deviate from it is to devalue not only oneself but to render her accomplishments or concerns as invalid. "Crazy" may well be the most insidious one of the four because it encompasses so much. At its base, calling women "crazy" is a way of waving away any behaviour that men might find undesirable while simultaneously absolving those same men from responsibility.’ – Harris O’Malley